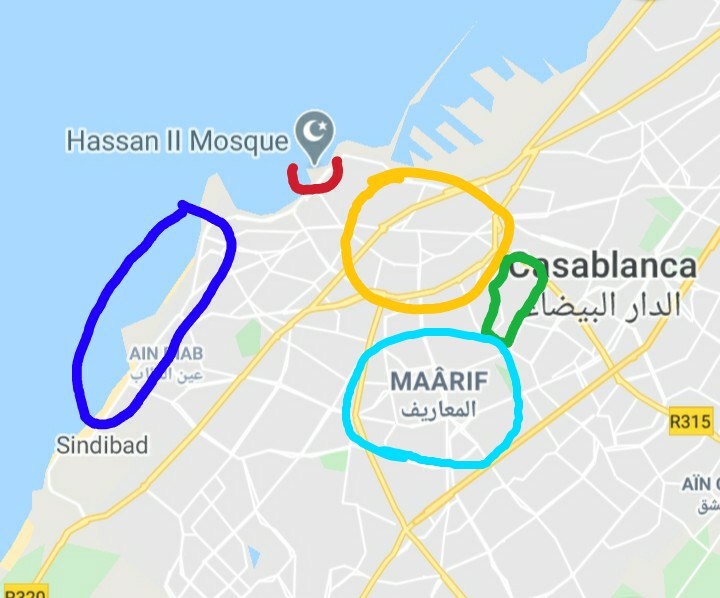 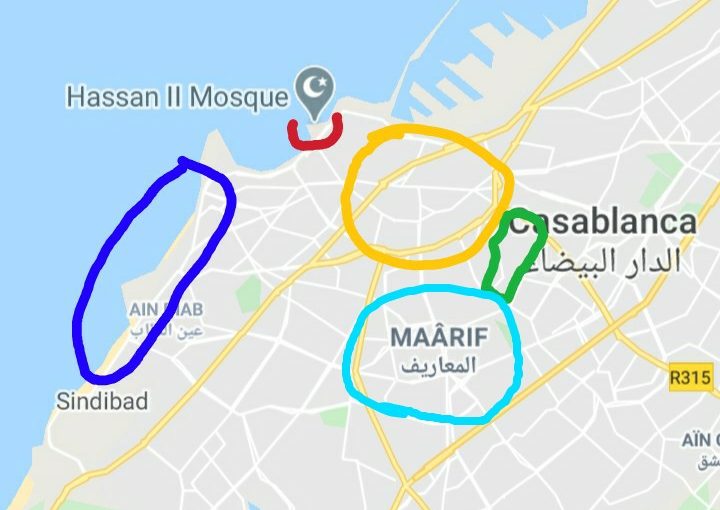 Blue Area:
This place is called “Ain Diab” (Wolves’ eye) one of the most famous
and crowed places in Casablanca, especially in the summer after
sunset. It a pretty big place that is located next to the beach, so it has a
great view. There you can find everything that you want! Fast-food
chains, restaurants, coffee shops, bars and clubs. And one more thing!
And the only thing you should look out for is pick pocketing, there are
some God-level thieves. Other than that, “Ain Diab” is mostly safe.
Ain Diab is far from most places in Casablanca, which means that
you’ll probably need transportations to get there. I would recommend
taking a taxi or the tramway, they are the best choices, unlike the
buses, dare I say the worst buses in Morocco.
Red Area:
Hassan II Mosque, it’s one of the biggest Mosque in the world. It’s a
“must-see” place in Casablanca, which also located by the sea. It has
some amazing exterior and interior designs, though if you’re not a
Muslim, you won’t be able enter to where the prayers are held, which
is a shame! But you can still enjoy it from outside.

Yellow Area:
“Medina Kadima” (The old city) is one of the oldest historical places
in the city. It has a big wall all around it, which has a big door called
“Bab Marrakesh”. There you can buy a lot of different types of
merchandise, like old Moroccan musical instruments and traditional
clothes. I should warn you though! Criminal activities are common in
some neighbourhoods in this area, if you ever visit it, try to stay as
close as possible to where there plenty of people, in fact, this applies
to most places in morocco.

Green Area:
Habbous (Prisons), unlike what the its name implies, this place is not
actually a bunch of prisons. This is one my favourite places to visit,
somehow it feels like home. It’s probably the best place in morocco to
buy traditional clothes, though they might be a little expensive, you
can never worry about the quality, especially if you bought your stuff
from the shops. Visiting this place makes you feel like you’re in the
20s or something like that, what I’m trying to say is that when you’re
there. It’s a very safe place because it’s always crowded, except at
night of course.
Sky Blue Area:
“Maarif” or “Medina”, is one of the best modern places in
Casablanca. It is known for the two towers called Twin Center, they
have fancy restaurants and hotel, one of those restaurants is called
Sky 28, it’s very expensive, but it has an amazing view of Casablanca.
There are many Hotels in “Maarif”, most of them are 5 star hotel, it
would be better and cheaper to rent a flat or an apartment.