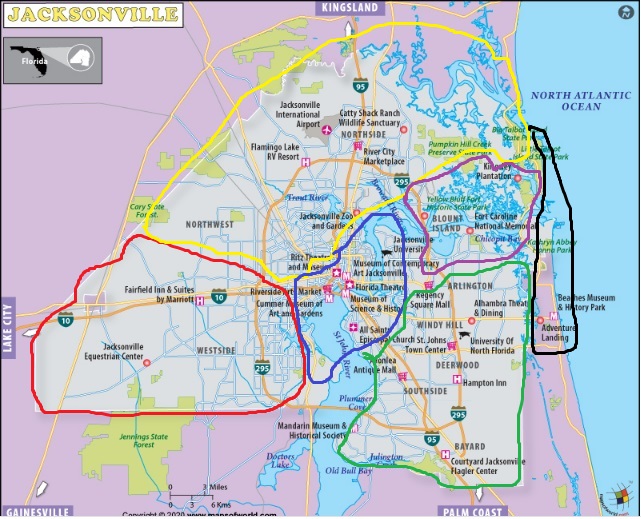 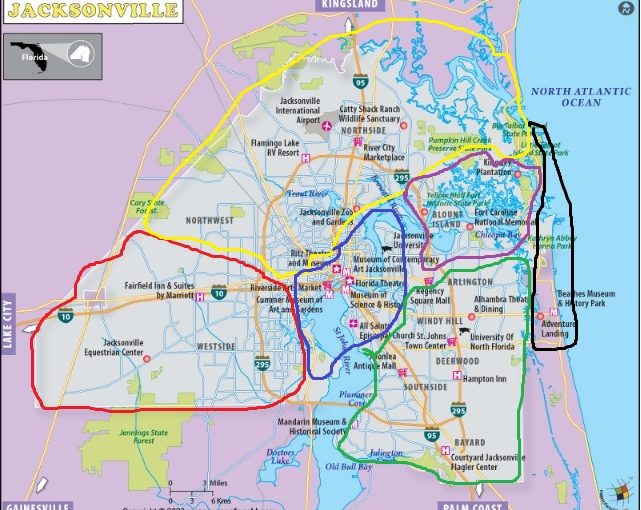 This map covers the regions of Jacksonville, Florida, USA. It aims to give you a basic idea of the nature and characteristics of each region.

Jacksonville is the most populous city in Florida and is the largest city by area in the contiguous United States as of 2020 with more than 500 neighborhoods.

The Downtown is Jacksonville’s central business district. The city’s oldest area, it is historically characterized by the city’s original boundaries set upon its creation. It is the nucleus of Jacksonville’s Urban Core, which includes LaVilla, Springfield, East Jacksonville, and Brooklyn’s surrounding communities, plus a portion on the south side of the St. Johns River known as Southbank.

The area that became downtown Jacksonville was on the north side of a St. Johns River crossing known to the Seminole as Wacca Pilatka and named after Andrew Jackson as the British Cow Ford called “Jacksonville”

For most of the American Civil War, the town was occupied by Union troops and steady development came after the end of the war, when it became one of the first major tourist designations in Florida. Jacksonville was annexed to several neighboring towns in 1887. Nearly all of downtown burned in the 1901 Great Fire, but soon afterward a major building boom followed.

Today Downtown Jacksonville’s concept of the city encompasses a broader area than typical Downtown Core and consists of many separate neighborhoods or districts.

The Northside is a large area of Jacksonville, Florida, and is commonly understood as a counterpart to other large regions of the city, the Urban Center, Arlington, Southside, Westside, and the Beaches. The vast region comprises historic neighborhoods, cultural landmarks, protected habitats, and essential transport and logistics facilities, all of which are central to Jacksonville’s history and growth. Numerous communities are situated within the vast Northside city. These include the Black Hammock Island, Brentwood, Dinsmore, Fort George Island, Garden City, Highlands, Lake Forest, Longbranch, Moncrief Park, Norwood, Panama Park, Pecan Park, Oceanway, Ribault, Riverview, Royal Terrance, San Mateo, and Tallulah-North Shore, but are not limited.

The Northside was integrated into the city in 1968 as a part of the incorporation of Jacksonville, a city-county fusion between the City between Jacksonville and Duval County governments. The area houses a large portion of the city’s transport and logistics infrastructure, including Jacksonville International Airport, Jacksonville Station, JAXPORT Cruise Terminal, Blount Island Marine Terminal, and Dames Point Marine Terminal. The area also houses the Jacksonville Zoo and Gardens which relocated to the Northside in 1925 and has doubled in size since then. There is no clear description of what constitutes the Northside boundaries, but studies have shown that the vernacular area at 20th Street and west and north of the St. Johns River is considered to be approximately north of the Urban Center and Westside.

Southside, or South Jacksonville, is one of the larger areas of Jacksonville, along with Northside, Westside, and Arlington. The term “South Jacksonville” was originally applied to the area south of Downtown across the St. Johns River, a neighborhood now commonly called San Marco. However, today the word covers a far wider area. Using GIS data to sort 45 businesses in their name with “Southside,” McEwen identified an area east and south of the St. Johns River, north of the Mandarin neighborhood, inland from the Intra coastal Waterway, and south of Arlington. He noted, however, that at its northern borders Southside overlaps with Arlington.

Westside or West Jacksonville, as with Northside, is one of Jacksonville’s typical large areas. It refers to the large section of Jacksonville west of downtown and the central neighborhoods, covering both residential areas and a huge tract of undeveloped land. John W. McEwen mapped the Westside as west of the St. Johns River and Downtown at around Interstate 95, and south and west of the Northside using GIS to sort 45 businesses with “Westside” in their name. Some Westside neighborhoods include Argyle, Riverside and Avondale, Ortega, Cedar Hills, Lake Shore, Murray Hill, Normandy, Sweetwater and Confederate Point

a cool lady, dedicated and professional in conduct. Medical Laboratory Technician is my profession, wrting is my calling