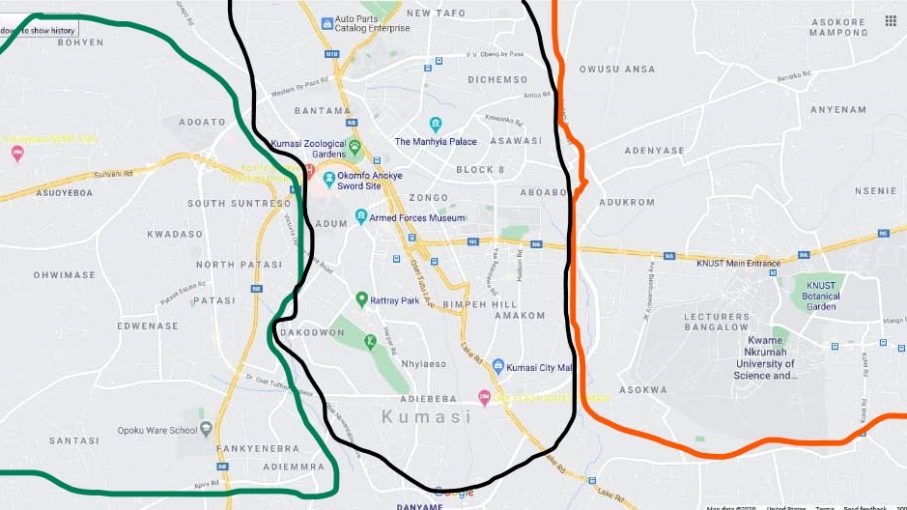 Green Area – This area has popular places like Santasi, Kwadaso, Patasi, Suntreso, and Edwenase. Most of these areas can be regarded as ancient places. One of the best senior high schools, Opoku Ware School. Patasi and Suntreso is a purely residential neighborhood and most of the people living there are financially sound. The nightlife in this area is centered around Santasi. The means of transport is vehicular as there is a wide range of commercial vehicles available which makes commuting very easy. These areas are quite safe; however, one would have to be careful when in the neighborhood.

Black Area – Nhyiaeso, Manhyia, Aboabo, Dichemso, Adum, Asawase, Bantama, and New Tafo are found in this area. Nhyiaso is a hub for the affluent in society. Nhyiaeso can also be said to be one of the popular residential areas in Kumasi. It has quite several ‘rich’ people living there. Bantama is like the Las Vegas of Kumasi. All sorts of entertainment can be found there, and it isn’t surprising that it has a famous street called Bantama High Street where everything goes on there. Manhyia is the seat of government. The famous palace, Manhyia Palace, is located there and its serene environment gives an individual the best experience. Asawasi is mostly made up of Northerners and as such a lot of Muslims are found in this area. New Tafo is also one of the residential areas of the town. Commuting is very easy and it is mostly by cars with a few tricycles available. There is an overwhelming nightlife, however, the place isn’t safe in the night, particularly Asawasi, Aboabo, and Dichemso.

Red Area – The area has notable places like Asokwa, Asafo, Bomso, Oforikrom, Asokore Mampong, and Odom. Asafo can be considered as the market hub with the Asafo Market found here. The sports stadium and one of the tertiary institutions in Kumasi can be found here. Oforikrom is just like Asokwa; however, the only thing absent is the market. Yet, it has the premier university of science and technology in West Africa, Kwame Nkrumah University of Science and Technology, located there. Daily commuting is quite an easy one as commercial vehicles can be accessed with ease. Parts of this area that has nightlife are Asokwa and Asafo. These two areas will have people available in the odd hours of the night, however, safety is limited as it has an area known to have some robbers and pickpockets around.