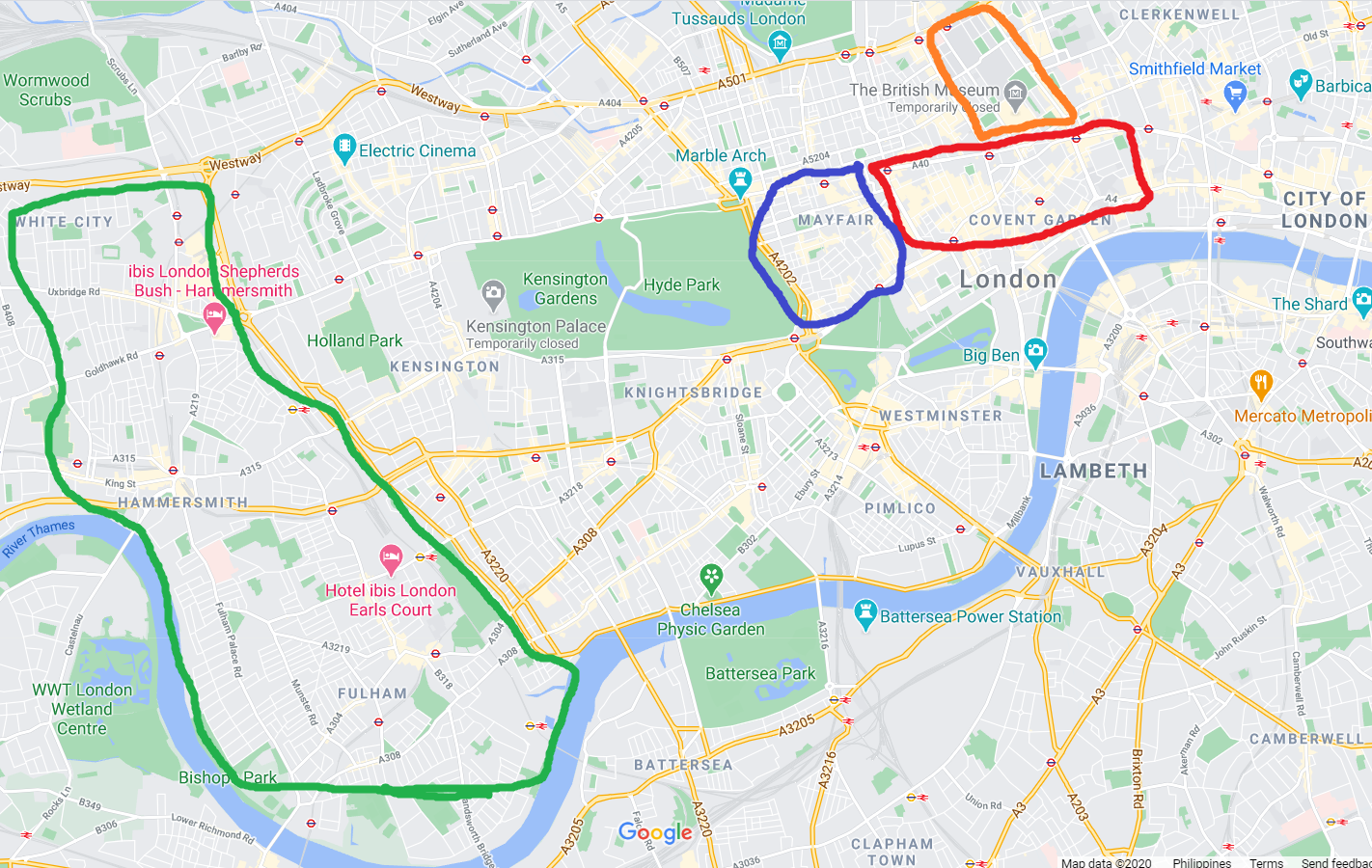 This is a “must visit” for tourists, bang in the centre of London. Home to the bustling Chinatown district, where you can find amazing Asian food and have a fun night out, the West End is also home to the Theatreland district, with all of the world famous shows in some historic venues; the bright lights and neon signs of Piccadilly Circus; and Covent Garden, where you’ll find street performers, loads of restaurants and bars. Covent Garden in particular has some amazing pubs for fans of real ale. Like any tourist area in any major city, be on guard for pickpocket, but the area is generally fun and safe to visit, even at night.

There’s a reason Mayfair is the most expensive property on the Monopoly board. It’s where you’ll find most of the extremely fine things in London, such as the auction houses, Michelin starred restaurants, swanky hotels, shops, private clubs and casinos. It’s nice to walk around, but you’ll be paying at least £200 a night for a hotel if you’re wanting to stay there.

Home to the famous Bloomsbury Publishing (who gave us the Harry Potter series), the area has quite an intellectual vibe, so don’t expect to see much by way of nightlife. If the weather’s nice, you’re more likely to find people sat out in the park reading. Mostly because it’s full of academic institutions such as the British Museum, as well as a whole bunch of universities, colleges, medical institutions and galleries.

A pretty diverse part of West London. You’ve got Shepherd’s Bush, which is not the most salubrious area these days, but is certainly an interesting and vibrant melting pot, home to many different communities. There you will find affordable and authentic cuisine from all over the world, but particularly from North Africa and the Carribbean. You’ll also see lots of markets, traditional English pubs and many brightly coloured textiles and fabric shops that cater to the Indian, African and Caribbean communities. At the other end of Shepherd’s Bush Road is Hammersmith, which is home to a couple of famous theatres and a lot of commercial office buildings, which is a much more modern part of district. Hotels around Earl’s Court, Shepherd’s Bush and Hammersmith are much more affordable than in the centre of London, yet you are only a 15-20 minute tube ride from the West End.