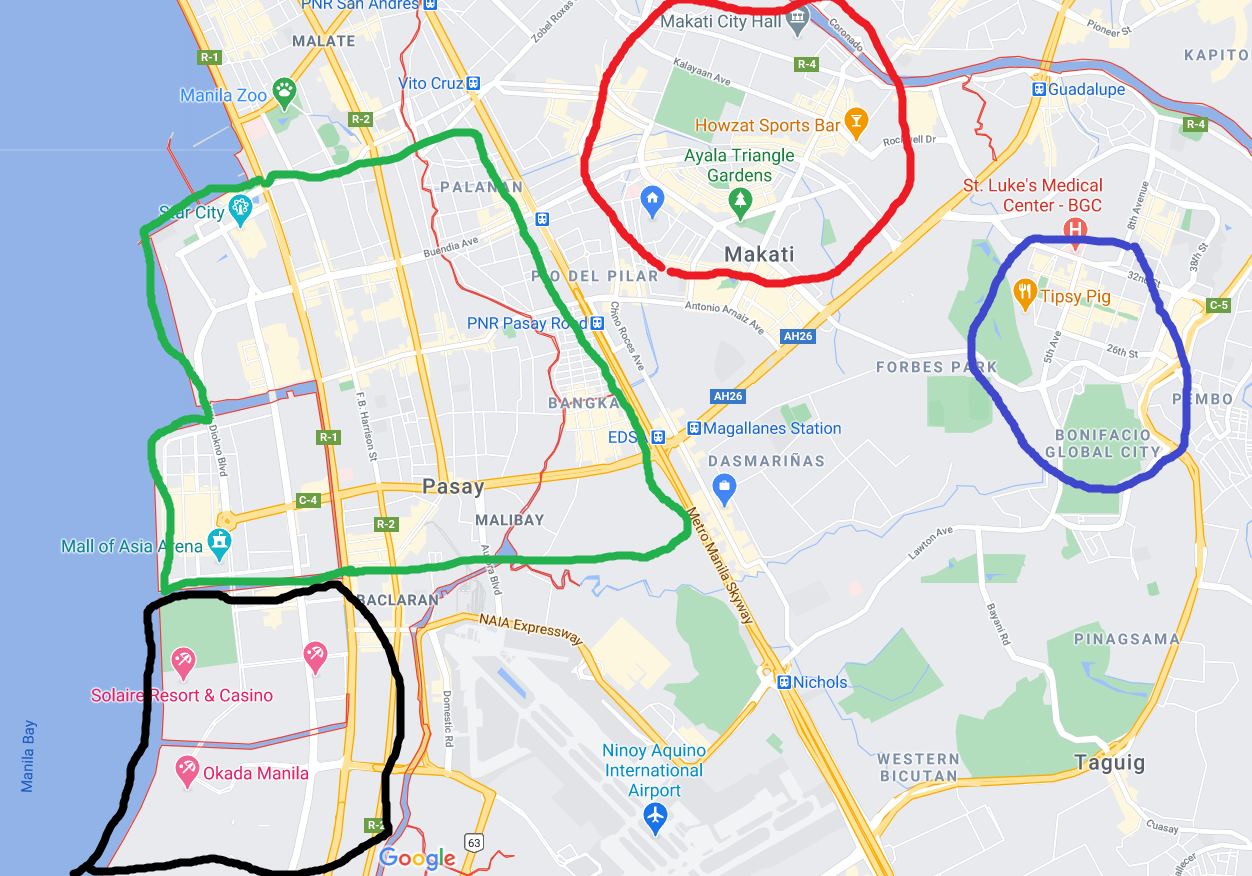 Home to the central business district of Metro Manila, there’s an awful lot going on in Makati. Salcedo Village and Legaspi Village (sometimes spelled Legazpi) are home to most of the expats and wealthier residents, as many of the major office buildings are in Makati. There’s a good amount of nice restaurants and cafes in these areas, but the real nightlife is found down town in Poblacion.

Although I try to avoid the seedier red light district, where all the expat sports bars are found (along with prostitutes and ladyboys) there are a few hidden gems there. You’ll find a few small bars with a cool vibe selling surprisingly good quality local beers and cheap finger foods (pika-pika).

You also have Greenbelt Mall in Makati, which is where you’ll find even more high end restaurants and some of the best hotels in the area. You could pay close to £100 a night in these places, but Makati is full of far cheaper accommodation, particularly around Poblacion.

Makati is generally safe, even at night, just take a bit of care around the red light area.

More commonly known as BGC, or sometimes “the Fort”, this part of Manila exists in something of a bubble. It’s shiny and new, and is home to a lot of major tech companies. There’s a lot of very trendy bars and restaurants and so you’ll find a lot of expats here, as well as the trendy and well educated Filipinos. There are some excellent rooftop bars with nice views, but avoid them during rainy season!

Technically, the airport is also part of Pasay, but the main things to be found here are the attractions of Star City and the famous Mall of Asia, known locally as MOA. You’ll find a young crowd at MOA, not only window shopping but eating at the many cafes and restaurants in the area. Filipinos love an “eat all you can” buffet and you’ll find a few of these here. Parts of Star City are currently closed due to a recent fire (2019) but should be reopening soon.

South of Pasay is Entertainment City, a strip of casinos and resorts constructed by the government. You will see the wealthier locals attending these venues, as well as lots of Chinese tourists and members of the expat community. Although gambling is obviously the main event down here, the casinos really do know how to put on a show, with live acts in the evenings. Okada casino even has a nightclub in the centre of it.