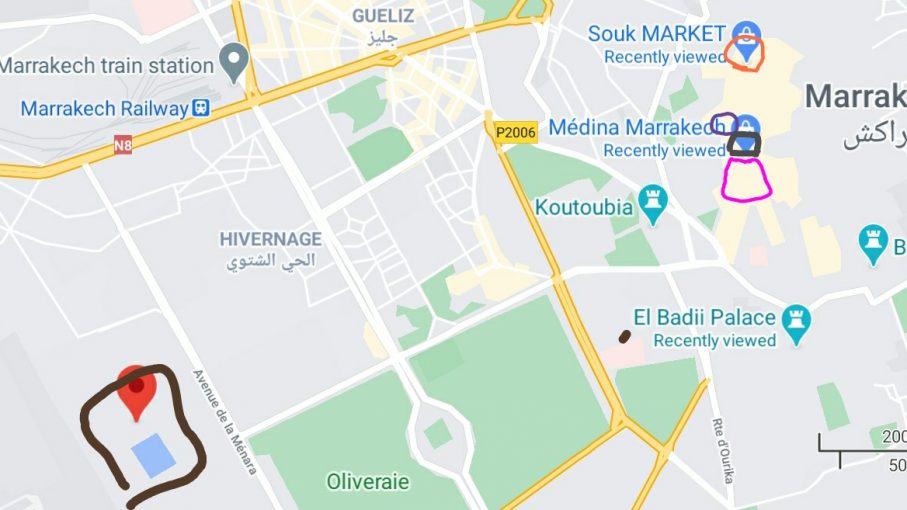 Pink Area:
The one and only, “Jemaa el Fnaa”, one of the most known Moroccan
locations in the world. Here’s a tip for you! When you visit this
location, especially at night, go with an empty stomach because you’re
gonna be eating a whole lot of foods for an affordable price. And oh,
expect to see a lot of monkeys dancing around, and all kinds of snakes
and other weird stuff. If you’re a foreigner, expect that some people
will try to milk money out of you, it’s better to visit there with a
Moroccan friend or try to befriend some locals. Keep in mind that this
location is one of the safest locations in morocco.
Orange Area:
“Marrakesh Souk”, a famous market where they sell cultural and
antique stuff like vases and other accessories, and don’t forget to drink
the tea there, it’s something that you’ll be thinking about for years.
The second that you step into this place, you’ll forget about the
outside world and feel like you’ve just travelled hundred years back in
time. I don’t know if I should remind again, but BEWARE of the
masters of pick pocketing.
Purple Area:
Alright, so this is a Wakanda-type of location, it’s called “The Secret
Garden of Marrakech”, it’s a hidden place if you just want to chill and
relax. You’ll also find there many kinds and types of flowers.

Grey Area:
You know how Casablanca has an area called “the old city”? Yeah
you guessed it! Marrakech also has a place called “Medina of
Marrakesh” (The old city of Marrakech), it’s a great historical city
where you’ll see some old buildings and a whole bunch of old other
stuff. This place attracts tons of tourists every year.

Brown Area:
“Menara Jardin”, one of the most important historical landmarks in the
city. You can’t go to Marrakech and not give it a visit. This place has
a deep pond that gets the water from the Atlas Mountains. And hey,
don’t forget to take a photo or dozens of photos in this place, it’s
pretty cool. The other locations mentioned above are close to each
other except for this one, you’ll have to take a taxi, which could be
expensive depending on the driver. Some drivers lie about the cost if
you’re not a local, it happened to me once even though I’m a
Moroccan and I don’t have the same accent.