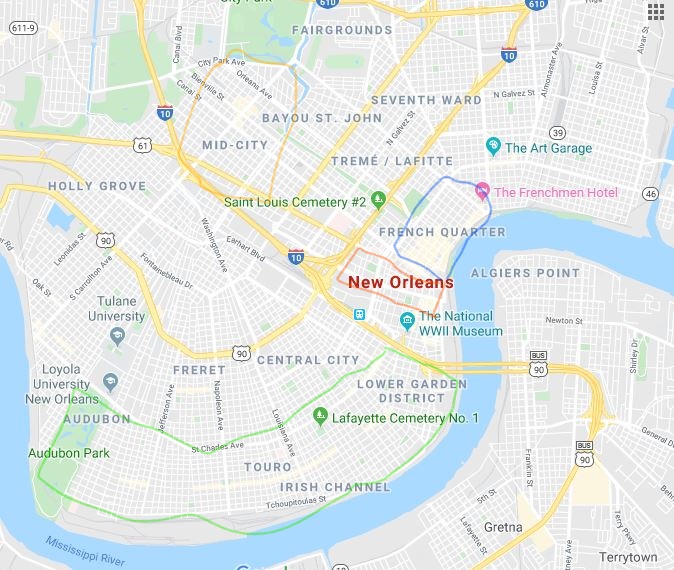 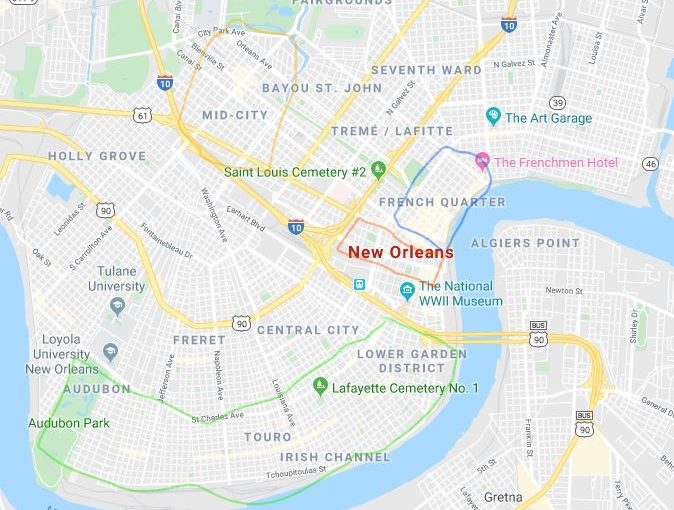 New Orleans’ oldest neighborhood, this is the most touristy part of the city.  A compact and easily walkable neighborhood, all the French Quarter’s sites are generally within walking distance of each other. Driving in the quarter can be a bit tricky due to the narrow streets and crowds, but services like Uber and Lyft are easy to find and a relatively affordable way to connect to other areas of the city. A cheap and enjoyable trolley line connects the French Quarter to the Garden District/Uptown and Mid-City. Almost every street in the Quarter has a wide range of bars, restaurants, and sites.  The Quarter’s most famous street – Bourbon Street – stays loud and crowded late into the night.  The French Quarter is for those who want to be close to the action and nightlife and don’t mind some crowds and noise. Accommodations range from luxury hotels, to hostels, to AirBnB type rentals.  Prices in the French Quarter are generally the highest in the city.

Downtown is centrally located for those who want easy access to other parts of the city.  All trolley lines service the downtown area and cabs/Uber/Lyfts are easy and affordable to catch. Electric scooters are also readily available as a way to get around short distances. Downtown is calmer than the French Quarter, but within walking distance to Bourbon Street and other tourist spots. During the day, downtown teems with business types, but at night, it is relatively quiet.  Accommodations downtown lean toward business travelers, however, during slower times of year, downtown hotels and apartment rentals can be a cheaper and quieter than the neighboring French Quarter.

The Garden and Uptown Districts are some of the most popular of New Orleans’ in-town neighborhoods.  These areas are filled with southern-style homes and streets lined with moss covered oak trees.  Trolley Service easily connects these neighborhoods with downtown and the French Quarter.  In addition to its many neighborhoods and parks the Garden District and Uptown also have plenty of restaurant, bar and shopping options. The Garden District and Uptown are home to some of New Orleans wealthiest residents as well as two of its local Universities (Loyola, Tulane) giving it an interesting mix of the old and new.  The Garden District is for those that want a quieter New Orleans experience. Accommodations range from Bed and Breakfasts, to hotels, and AirBnBs.  Accommodations in these areas are generally less expensive than what you’ll find in the French Quarter.

Less stuffy than the Garden District and Uptown, Mid-City offers visitors a more laid-back neighborhood experience. The neighborhood is connected to other parts of the city via Trolley and Bus lines. Accommodations are generally limited to some Bed and Breakfasts and AirBnBs and this is one of the most affordable areas of the city.  The neighborhood has plenty of bars and restaurants, most of which are never visited by tourists found in other parts of the city. Mid-City is for those who want a more authentic New Orleans experience and who are looking to save a few bucks accommodation prices.