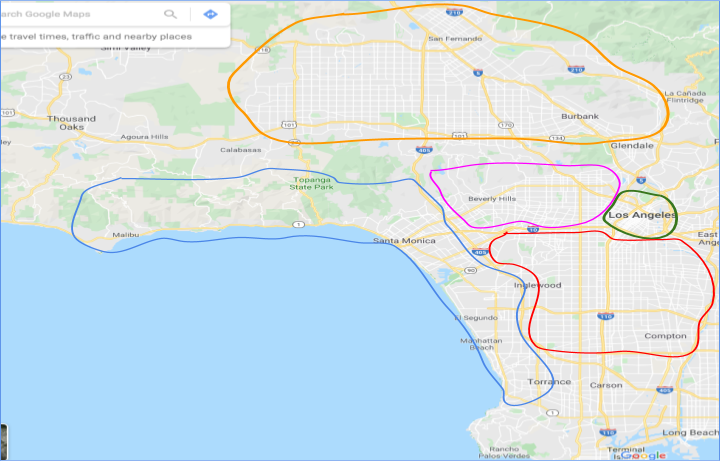 Here is a pretty comprehensive mapee of Los Angeles and the surrounding areas. This should help you decide where to stay in Los Angeles, as a visitor or tourist. Some say Los Angeles is one of the most confusing metropolis’ in the world because of its awkward city planning and having adjacent cities with people getting lost easily. It has been called an “urban jungle” due to its miles upon miles of infrastructure and lack of parks, but do not let that scare you. Although this is not the entire metropolitan area, this mapee comprises nearly all of Tinseltown and should give you a broad understanding.

The northernmost section of the city of Los Angeles in this orange section is called the San Fernando Valley. The San Fernando Valley is predominately suburban, especially in the northern parts of the area, which are called Sylmar and Porter Ranch. The Western San Fernando Valley is also very suburban and has very safe regions such as West Hills, Calabasas, and Woodland Hills. So suburban is this part of Los Angeles that many girls who live here are often called “Valley Girls,” which comes from the famous movie “Valley Girl,” which had taken place here. Speaking of film, the San Fernando Valley is home to many motion picture companies, such as Universal Studios, NBC, and ABC. All of these are located along the southern edge of the valley, and it is these areas that unsurprisingly have the most abundant and most vibrant nightlife. Due to the cultural diversity of the region with many immigrants from Vietnam, Armenia, and elsewhere, many excellent ethnic restaurants are worth the trouble. One restaurant that you should definitely visit is the Lebanese establishment called Furnsaj Restaurant & Bakery in the Granada Hills neighborhood, which is the northern section of the valley. If you are planning to stay near Ventura Blvd, the Scratch Bar And Grill in Encino will suffice. Although relatively safe, there are still areas of the valley that you should be cautious of, especially at night. The communities of Pacoima, Van Nuys and Reseda should be avoided at sunset as they do have gang activity in these regions.

West Side And Beach Communities (Blue)

When people think of California or Los Angeles, they think of celebrities, movies, and affluence. This region and the pink one, which we will discuss later, best represents that image. West Los Angeles is widely known for being one of the best areas in the city. With the affluent communities of Bel-Air and Brentwood to the coastal towns of Santa Monica, Malibu, and Venice, this area does not disappoint. The number one attraction in this area is the Santa Monica Pier and the Venice Beach Boardwalk, which is one of the most eccentric beaches you will ever visit. Another destination in the area that is worth your trouble is the Venice Canals, although not offering anything, it is visually impressive. The Westside also has the region’s best parks. In the Malibu region heading towards Calabasas, parks include the Malibu Creek State Park and the Santa Monica Mountains National Recreation Area. Much like the Valley, the Westside is very diverse, and with that diversity, you will find a multitude of high-quality restaurants ranging from Mexican to Mediterranean to even Ethiopian. Even though this area has a high police presence, it should be noted that it is not immune to mischief. Tourists should be wary of staying at the beaches pass sunset, especially if in the Venice area. This is due to the high usage of drugs that often bring with it drug dealers and prostitution. In fact, drug usage is so prevalent in Venice that it has been called “Meth Capital of Los Angeles.” Besides that, you should be cautious of the homeless. Although the vast majority are harmless, you do have some who are dangerous. So I suggest you stay on or near high traffic areas to avoid much of this trouble.

Much like the West Side, this area of Los Angeles County is arguably it’s most well known and most affluent. Full of glitz and glamour, there are many things to do and see in this area of the city. Since the founding of places like Beverly Hills and Hollywood, both have done exceptionally well in marketing themselves as one of the world’s premier locations for cinema, celebrities, and capital, which still rings true today. Places that are full of this and I strongly suggest touring are the Rodeo Drive section of Beverly Hills and the many famous attractions of Hollywood like the Walk Of Fame, Capitol Records, and Hollywood Sign. On Rodeo Drive, for instance, you will find some of the most expensive stores in the area, such as Louis Vuitton and Gucci, which can sell items such as handbags for close to 1,000 dollars! Besides that, the place to go to this area will be the Greystone Mansion. Membership can range from 50 dollars for seniors to about 20,000 dollars per year for corporate. The manor predominately functions as an exhibit to the public. If you continue heading east, you will reach the Los Angeles community of Hollywood, which is one of the most vibrant areas of Los Angeles. If you do not plan on having a good time and just content with sightseeing, Hollywood Blvd is where you want to be. On this street, you will be able to see the many celebrities on the Walk Of Fame, the Dolby Theatre, and if you continue to Vine Street and make a left, the Capitol Records building will be straight ahead. If you plan on eating, the region has you covered as it offers a whole host of restaurants to chose from. One that should interest you is the Musso & Frank Grill, which offers authentic American cuisine.

Downtown Los Angeles is the financial capital of the area and has seen much improvement in prior years, even with the growth in homelessness. Despite this, Downtown Los Angeles is becoming a go-to destination that is rivaling the critically acclaimed regions of Beverly Hills, Hollywood, and the Westside. Much of the growth can be attributed to the extensive development and restoration of LA Live, a place with all sorts of entertainment, which has opened the way for new hotels and high-end residential communities. Other venues that are also worth checking out are the Convention Center and the Staples Center, which offers events from hockey to professional basketball. Other key destinations that you may find of interest, especially if you are a shopper, are the Jewelry and Fashion Districts. The Jewelry district in Los Angeles is the largest of it’s kind in the entire nation, grossing nearly 3 billion dollars, and the Fashion District, which spans 90 blocks and is the center for fashion on the west coast. Places I would go to eat would include the Otium, Badmassh, and 71 Above. Even with all this development, Downtown Los Angeles still has a significant homelessness problem, and it would be wise to avoid the areas east of Main Street, west of Alameda, south of 3rd street, and north of 7th. Within these streets is the infamous neighborhood that is called Skid Row. Skid Row should be avoided due to the rampant homelessness crisis and the prevalence of hardcore street drugs that, with it, come crime, gangs, and prostitution. Efforts are being made, however, to combat this and the city of Los Angeles has dedicated millions to solve this issue. Besides this, downtown Los Angeles should be a gratifying experience.

The infamous South Central district of Los Angeles is home to west coast hip-hop, some of the most notorious gangs, and the 1965 Watts Riots and Civil Rights Movement. Much has changed, however, since, as this community is undergoing significant changes. Once the gang capital of Los Angeles with notorious gangs such as the Bloods and Crips, South Los Angeles has mellowed substantially since the 1990’s with crime down drastically. This is predominately due to the area slowly becoming more like the West Side, as in the city of Inglewood, more and more infrastructure and luxury apartments are being created. This gradually has become more common inland as well, as the areas around the 10 freeway and USC has seen the most development. The best places worth visiting in this region of Los Angeles will be in the University and Exposition Parks near the USC campus. There you can visit the California Science Center, Exposition Park, and the Coliseum. Other worthy landmarks in this area include the Watts Tower in the Los Angeles neighborhood of Watts and the Lincoln Theatre off of South Central Avenue. Despite its development and resurgence, South Los Angeles still should be avoided at night, and if you are walking alone, it is best to practice caution. You can do this by staying on main roads or streets, having a knowledge of gangs in the area, or if you are approached either run, defend yourself, and/or call 911. The information regarding organized crime and the steps you can take to avoid it is free on the Los Angeles Police Department’s website.